This means we collect eggs in the wild, and incubate them on site, then keep the chicks until they are big enough to be banded and they are safer in the wild than newly hatched chicks. All birds we release are released into predator controlled habitat after approval by the Department of Parks and Wildlife. Chick survival rate at Yongergnow’s projects has been between 60% and 80%, which is a huge increase compared to natural survival of 1 to 2%. We released 13 birds since 2011 with very good success.

There are good Malleefowl populations in the Ongerup area, including sightings from Chester Pass Road in Stirling Range National Park, Highway 1 around Wellstead and Boxwood Hill, in the Bremer Bay and Jerramungup areas and bushland north and south of Ongerup. There is a small but real chance to see the elusive birds in the wild in our area.

*New Chicks at Yongergnow* in 2018 Drei & Maggie our current Malleefowl pair had their first chicks hatch. We currently have 7 chicks and waiting to see if there are more!

In the 2015/16 breeding season, Yongergnow’s Malleefowl Happy and Rhea were the first birds at Yongergnow to maintain an active mound and breed. Their first chick hatched in late November 2015, and 12 more chicks hatched in the subsequent 3 months. Of those 12 chicks, 9 survived. The mound also contained 22 unfertilised and/or unviable eggs.

This year (2017-18) our pair Drei & Maggie have laid eggs in their mound. Stay tuned to see if they have any chicks hatch!

Release of Malleefowl into the wild 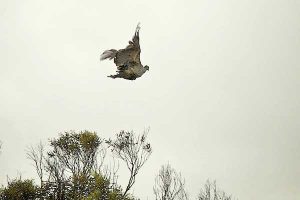 Since 2011, Yongergnow has released 13 Malleefowl back into the wild. Two birds went to Badja Station, seven to Wadderin Sanctuary, two to Tieline Nature Reserve north of Ongerup and two to Whiteman Park. One bird escaped from an aviary in 2012 and lived in the Corackerup Rd roadside reserve for approx. 1.5 years until he was found dead on the road side. It was obvious that he was hit by a car.

From 2010 to 2016, 69 Malleefowl eggs have either been incubated or bred at Yongergnow